skip to main | skip to sidebar

To win you musn't lose

OK so that was an awful headline but the point I wanted to make is that in these unusual times PR agencies and for that matter a whole range of other consulting businesses, need to rethink the way they approach new business. If they want to win more business, they may well be better off pitching for less. This may sound rather illogical but my point is that right now it's not uncommon for the number of firms bidding on a piece of business to be double the normal size. This has happened in part because clients are being really risk averse and want to make sure they are getting the best 'value' but also because agencies are having a hard time saying 'no'. I'd urge agencies to start saying 'no' for several reasons:

1. They can commit resources to pitches they actually stand a chance of winning, instead of having to pitch anything that has a check book.
2. They will suffer fewer losses. A large number of pitches are predetermined during these times and many of the agencies taking part stand no real chance.
3. Staff will appreciate being set up to succeed rather than fail.
4. By saying no they will be teaching the clients that long agency pitch lists are not really needed
5. By saying no they will sometimes make the client want them even more. Forbidden fruit and all that.

So next time you are asked to pitch for a piece of business, ask whether this really is the right one. People can deal with failure in a growing economy without too much difficulty. Successive failure in a tough economy could demoralize some agencies. Pitch less, win more.
Posted by Tim Dyson, CEO of Next Fifteen at 2:13 PM 18 comments:

Eventually a story gets the attention it always wanted

Note the dateline on the story below. Click on the headline to see the full story as it appeared in ZD Net.

When I interviewed IBM's software chief Steve Mills in February, he said something that has stuck in my head, and I couldn't figure out why. Now I understand: Mills was throwing down a gauntlet that could ultimately wrest control of Java from Sun.
Posted by Tim Dyson, CEO of Next Fifteen at 2:21 PM 35 comments:

What ever happened to....

I was struck this morning how quickly brands come and go and how easily brands get forgotten. I noticed a new type of search engine, thanks to David McCulloch who had tweeted about Kosmix. This reminded me about all the hype and then not so positive press that was generated around the launch of Cuil. Cuil was going to be the next big thing in search. It clearly isn't/wasn't. I struggled to remember its name and ended up on wikipedia trying to find out what it was called (it's hard to search for something that you don't remember the name of).

Kosmix has, rather sensibly, not tried to claim it will topple Google. This is good for two reason:

1. It would be a foolish claim for such a young product that is still in beta.
2. It seems to rely on Google for most of its searches. Indeed Kosmix would seem to aggregate a series of Google searches and organize them by media type etc. So if they were to kill Google, they'd end up killing themselves.

More seriously, I'm glad to see brands being launched with more realism at a time like this. The people that launched Cuil were ill advised and should have set more realistic goals. We all know that Google is less than perfect and that at some point someone will figure out a better way to deliver search but for now it is the leader by a mile. So if you intend to overtake it, you had better be pretty certain you have what it takes to do so before you start telling people that's your intention.
Posted by Tim Dyson, CEO of Next Fifteen at 8:53 AM 18 comments:

Transparency in a wiki world

Despite being in PR for a long time and despite having a tech bent, I was unaware until today of wikileaks.org, a site that publishes anonymous submissions and leaks of sensitive governmental, corporate, or religious documents, while attempting to preserve the anonymity and untraceability of its contributors.

The site is a great reference site for journalists, particularly those chasing political stories but I can also see how it will be used by PR people wanting to place controlled leaks. I can only imagine that companies will start to use this site to place leaks about their own business or products, but also leaks about the actions of competitors. Of course in true wikipedia style they don't make it easy for people to place leaks on the site that will stick but equally, a factually correct leak should stay posted.
Posted by Tim Dyson, CEO of Next Fifteen at 12:09 PM 25 comments:

American media finds its teeth at the wrong time 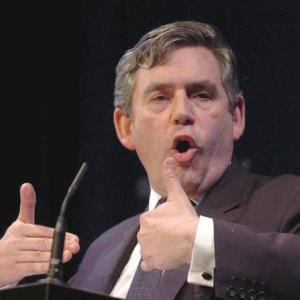 For years European journalists have felt that their American counterparts have given business and political leaders an easy ride. Since the meltdown in the financial markets, there has been a notable shift with today's NPR interview of the UK Prime Minister, Gordon Brown, by Steve Inskeep being a great example. Inskeep pushed Browne hard on a range of issues from the economy to Afghanistan. Interestingly Brown failed to answer almost all the questions. In short Browne came across badly. This is what the American public wants, right? Wrong it would seem. Yesterday on Marketplace (another program on NPR), show host Kai Ryssdal said they'd received many listener complaints that they were airing to much bad news. Put another way they'd been asking too many tough questions. I do understand the view that we don't want just bad news. But I'm pleased to see the American media finding its teeth. When the economy improves the American public will appreciate it.
Posted by Tim Dyson, CEO of Next Fifteen at 9:25 AM 19 comments:

Tim Dyson, CEO of Next Fifteen
Tim is CEO of Next Fifteen, a publicly traded group of PR businesses that has over 800 consultants worldwide. He joined the Company in 1984 and became its global CEO in 1992. As one of the early pioneers of tech PR, he has worked on major corporate and product campaigns with such companies as Microsoft, IBM, Sun and Intel. Tim came out from London to set up the Group's first US business in 1995 in Seattle and is now based in Palo Alto. Outside Next Fifteen, Tim is also on the advisory boards of several technology start ups.